Moving Your Toddler From Cot To Bed

Home Uncategorised Moving Your Toddler From Cot To Bed
9th April 20142nd March 202012 Comments on Moving Your Toddler From Cot To Bed
Ever since Chunk moved to his cot at 4 months old, he has been a sleep mover. Most nights I heard huge thumping noises, and go into his room to find he has headbutted the cot ends and sidebars and managed to go from one end of the cot to the other. Strangely it would never wake him up, and the only thing that would was when he started to get cold, as he always lost his covers through his journey to the other end of the cot!

So as it approached his second birthday recently, my sister didn’t understand why I hadn’t moved him from his cotbed to a toddler bed- I didn’t trust him not to fall out every night during his travels around the bed, and I didn’t want to be up every half hour when he woke up freezing and cover-less.

But after my sister continued to go on about it, I gave in and gave it a try a few weeks ago. I took the cotbed sides down and reduced the height of the bed.

I put a bed guard on one side, and the other side of the bed was against the wall. He loved having a big boy bed and slept quite well. I put him in a grobag to avoid him losing any covers, but having the guard and a sleeping bag was no different to being in a cot.

And that’s when I came across the Gro to bed range by The Gro Company. It’s bedding designed specifically for toddlers making the transition from cot to bed, and from sleeping bags to duvets.

It consists of a fitted bottom sheet with an attached pillow case to put your pillow inside (pillow always stays in one place this way!) and a zipable duvet cover.

We got to try the Alfred and the Aliens set, which is a great design and matched Chunk’s white bedroom beautifully. What I love most is how Chunk cannot kick the covers off as they are zipped onto the fitted sheet. This also means it’s also really difficult to fall out of bed, which was my main concern.

I initially found it a little confusing when trying to put it all together, as there are no written instructions that came with it (I’m really not practical in the slightest) but eventually I understood which way to put everything. 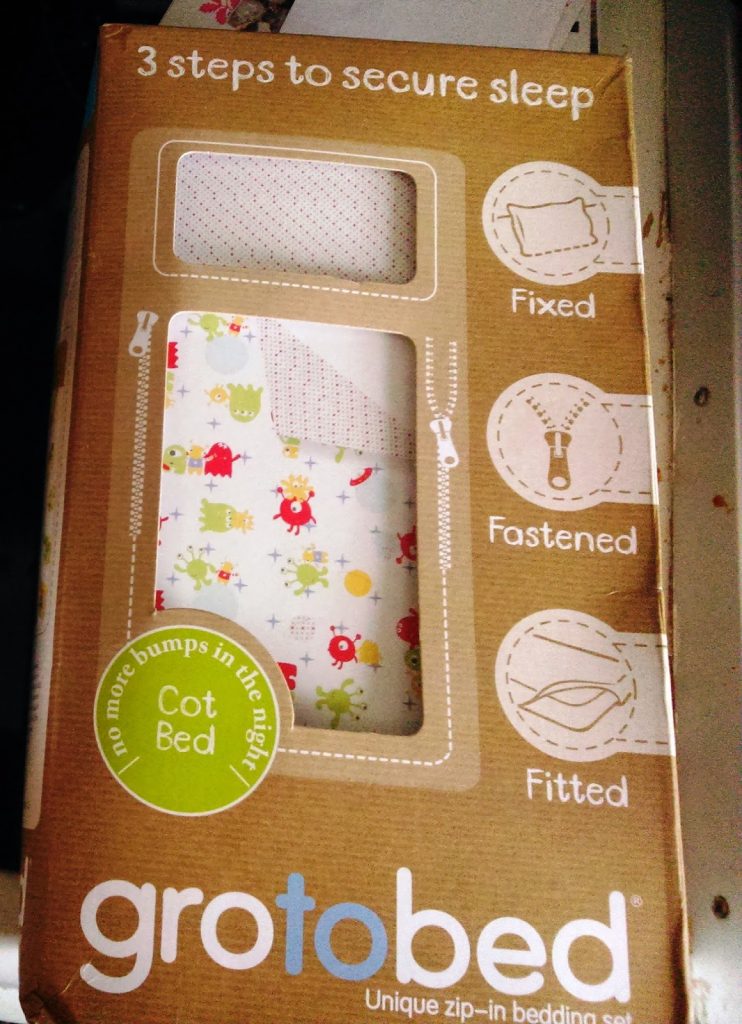 I put his cotbed duvet into the duvet cover, but there was still a lot of room left in the cover, so it can move around inside the cover which is not great. However, The Gro Company now sell duvets to fit these covers, so I shall try to save my pennies up, as they are £19.99 each.

I love that the fitted sheet also has a strap which goes around the mattress to stop the sheet from slipping off the bed, as I’ve not seen another other cotbed sheets like this. The pack comes with one sheet, so I would advise buying a second sheet so you have one to use whilst one is in the wash.

The bedding comes in 3 other styles too: Hetty Pop, Jolly Jungle and All Aboard Adventure, and it is sold in both cotbed and single bed sizes.

I recommend the Gro to Bed sets if you have a sleep mover child like mine, as it will give you piece of mind that they will stay covered up, won’t fall out of the bed and will therefore hopefully sleep through the night!

Chunk adjusted to this bedding really well, as he loved that he no longer had a bed guard up or a sleeping bag on, meaning once he woke up in the morning he could run to my bedroom rather than hobble in his bag!

I would love to get my hands on the Jolly Jungle set too as it’s another great design which would match most room decors, so may have to put this on my wish list too!

Because I love this product so much, I’ve been lucky enough to get another one to offer to one of you lucky readers! To enter the competition, click here.

For the purpose of this post, I was given these items to review. No payment was received for this post, and all opinions are honest and my own.