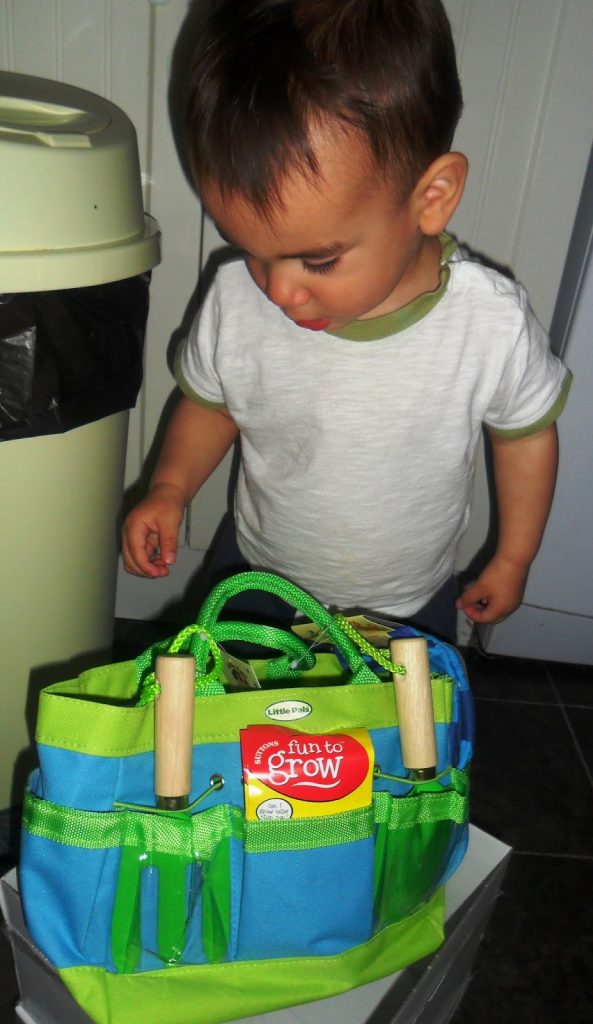 I entered Moneysupermarket.com’s #KidsGrowWild competition as a great excuse for Chunk to try gardening for ths first time, and to finally encourage me to sort my mum’s garden out!

After a rainy start to the day, the sunshine decided to grace us with it’s presence, so after being stuck inside all morning, Chunk got to release his pent-up energy onto the garden (which makes a change from the dogs and nanny’s DVD collection).

The kit contained a fork, spade, gloves (which Chunk doesn’t quite fit into yet), watering can and three packets of seeds. We decided to plant the sunflower seeds first, and designated a little area in nanny’s ‘plant-pot’ area, and called it ‘Chunk’s Garden’.

Nanny and mummy got rid of a few weeds, and then we helped Chunk open his little kit. He loved the fork, and after watching nanny dig up a little bit of the soil, he then ‘helped’ her dig up the rest. 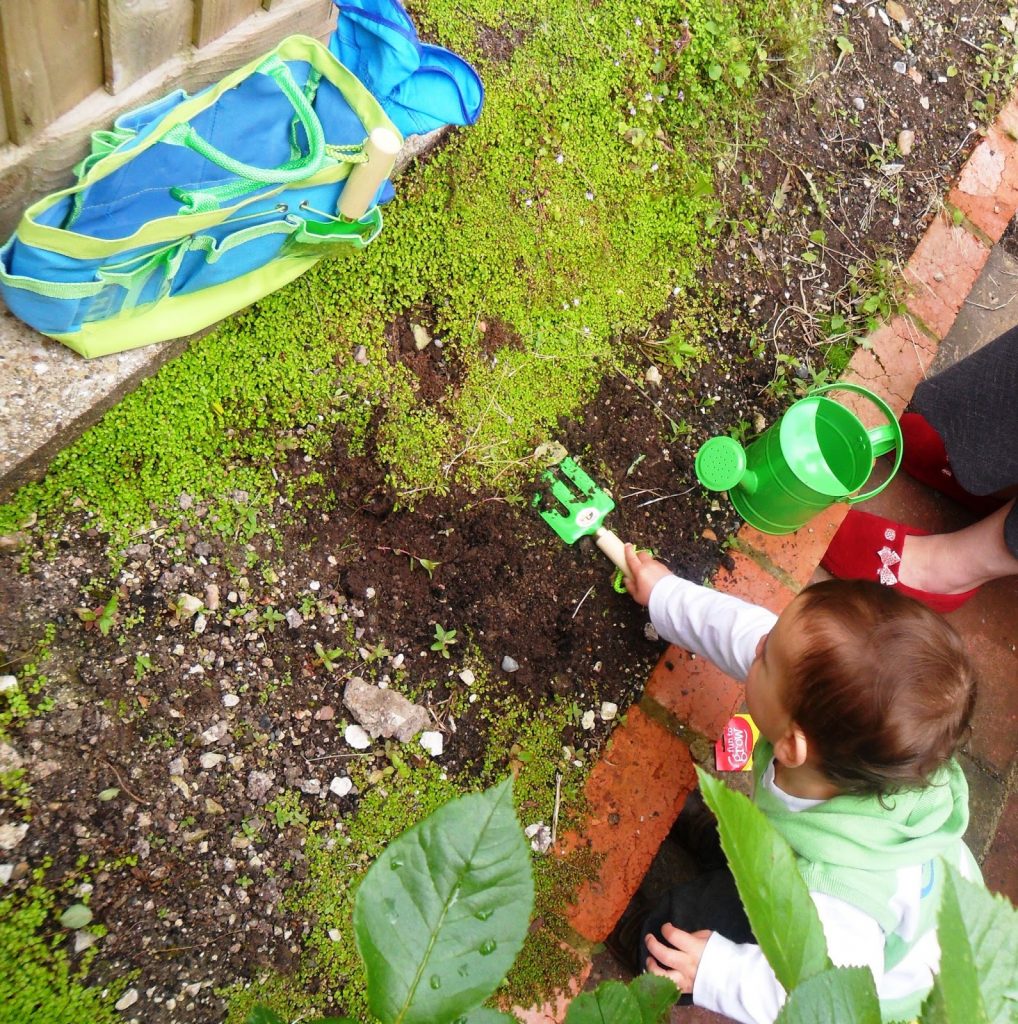 He loved prodding and squashing the soil with the fork (and his fingers) and spent ages lifting lumps of soil with the fork and watching it fall back down through the fork slits; It actually had quite a calming effect on him, so I will definitely use this next time I need him to chill out!

We then opened the packet of seeds and Chunk found scattering them over the soil hilarious, (a few were launched at me and the dogs from time to time too), and he then ‘helped’ pat the soil over the seeds. 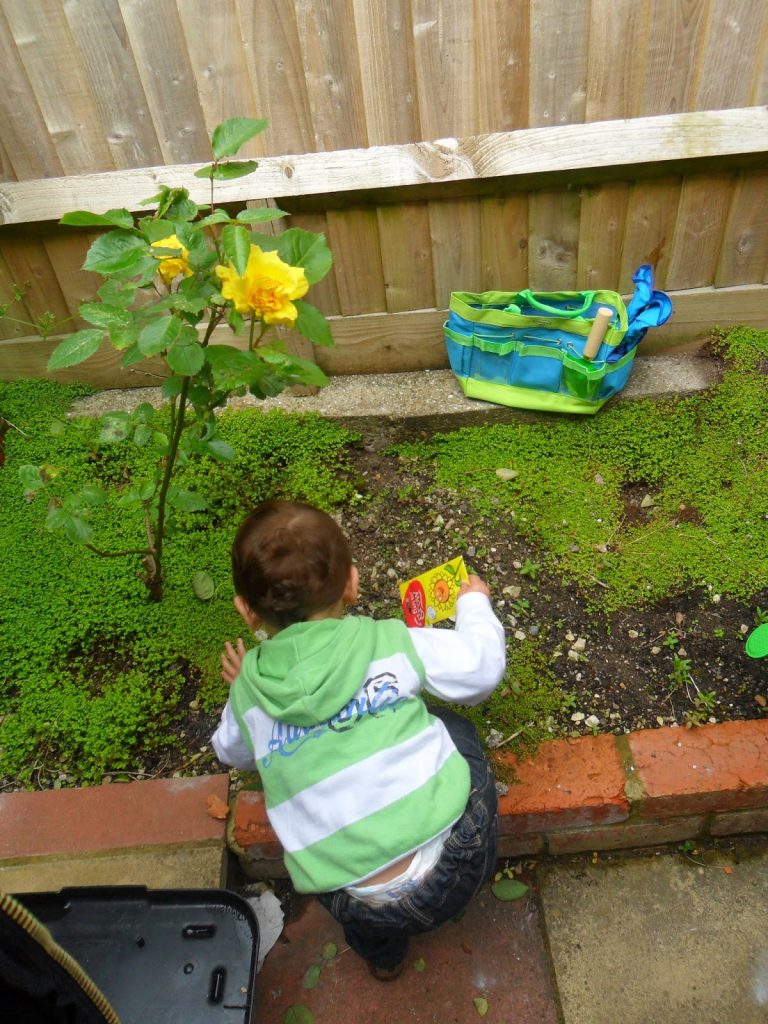 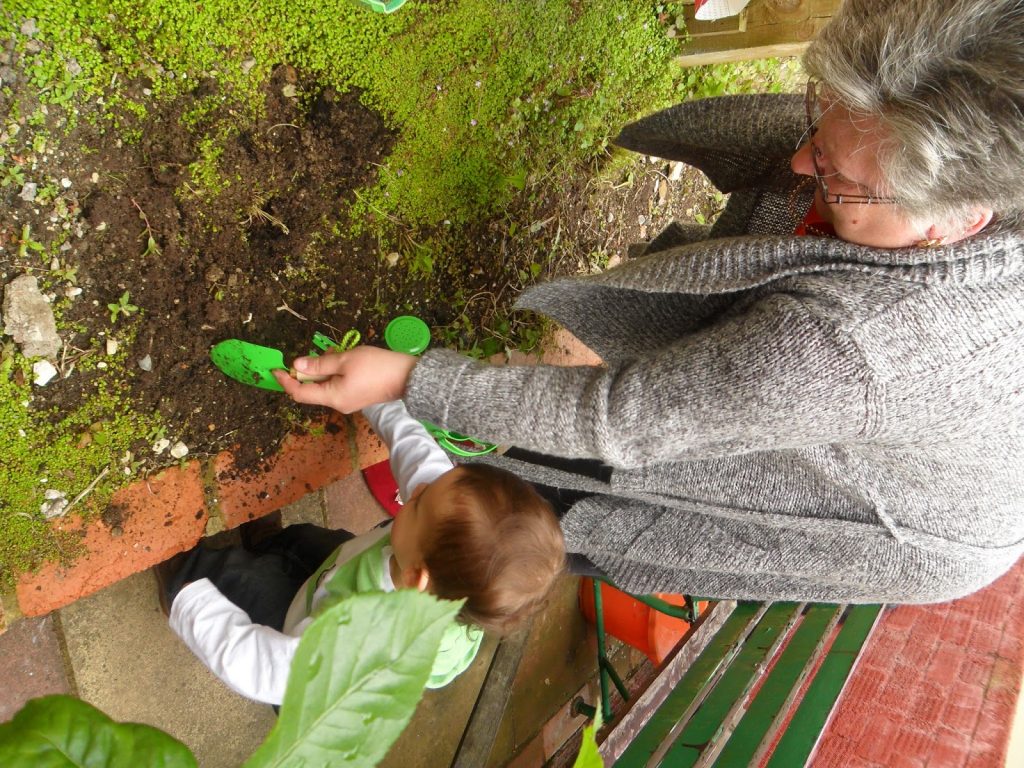 His favourite bit was the watering can. Nanny showed him how to water the seeds, and he then took over and wanted to water every plant pot he could find. 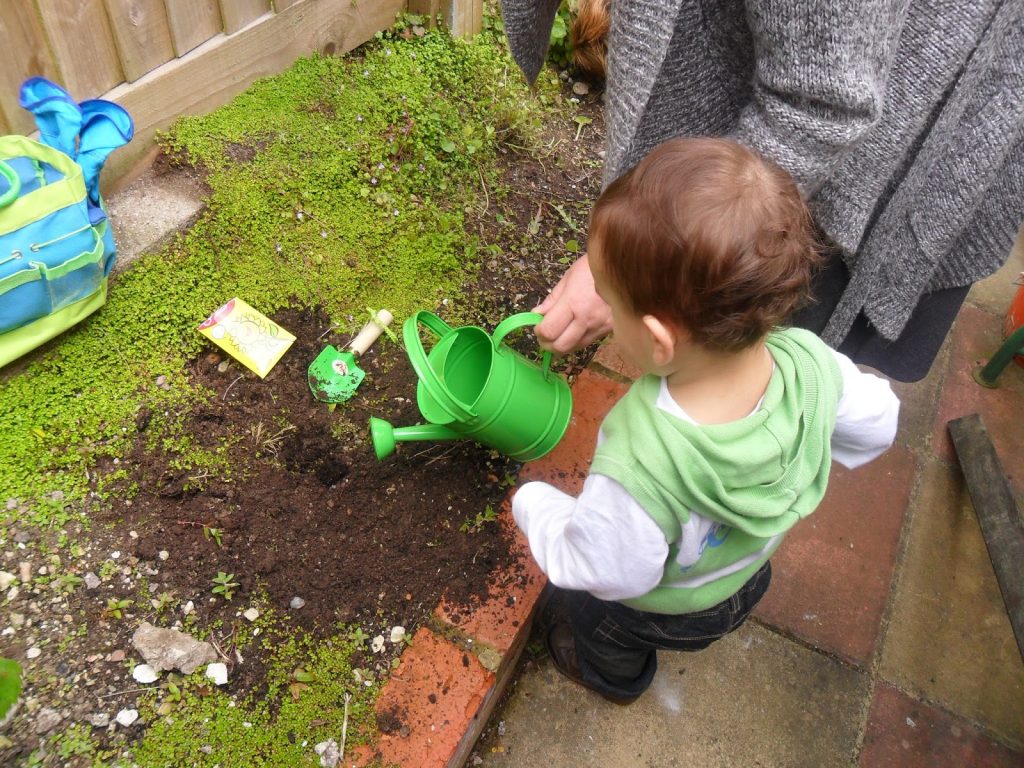 Initially he watered himself, (as the photo shows), but he soon got the hang of it- thankfully we used water from nanny’s water butt, or else she may have got a shock with the next water meter reading! 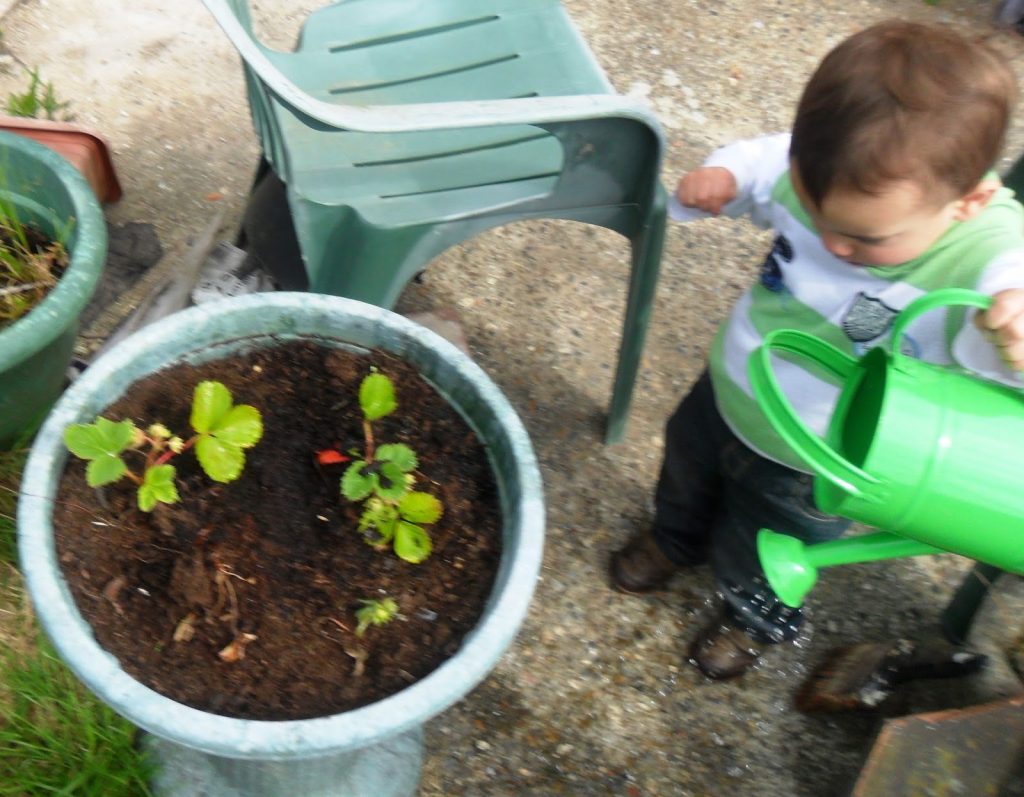 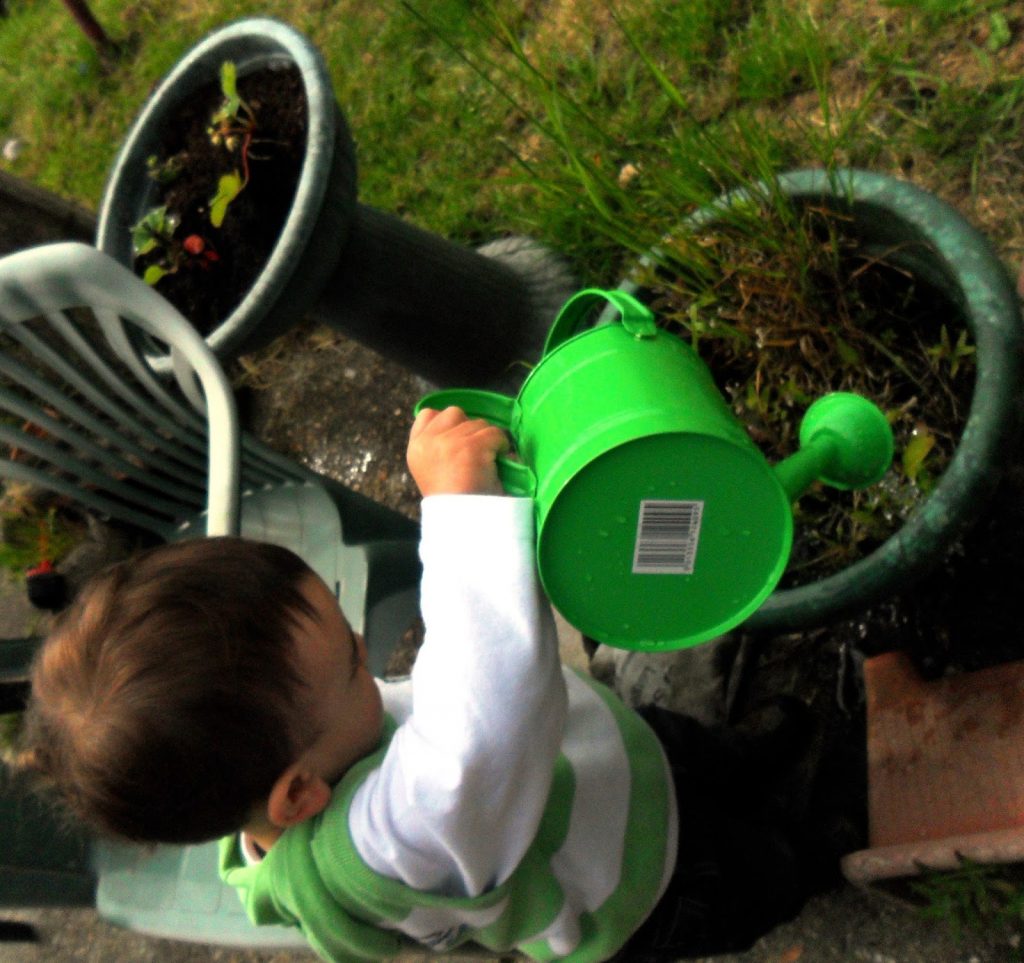 I’m so glad I applied for the kit, as it was a brilliant afternoon, and we can continue to use the pack, as we still have two more packs of seeds to plant. We can also track how much the seeds are growing with some great stickers that were included.

And what’s also great, is he now has a little kit for himself, so we can plant things together, watch them grow and he can learn how to maintain them all year round. Gardening has definitely become a permanent outdoor activity option for us now!

This post is an entry for BritMums’ #KidsGrowWild Challenge.