Preparing for our Blaze & The Monster Machines Party! 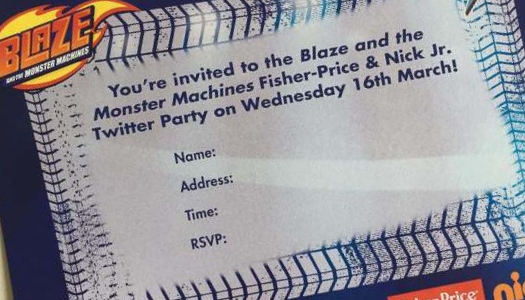 I’ll be taking part in a Blaze and the Monster Machines Twitter Party this week and you’re invited!
Grab a pen/phone and put the following into your diary:
Blaze Party takes place Wednesday 16th March 2016, 1- 3pm.
Blaze and the Monster Machines is a series for pre-school children featuring Blaze, the world’s most amazing monster truck, and his best friend and also driver 8-year-old AJ. They have many adventures in Axle City, a town populated with big-wheeled vehicles known as monster machines. Blaze knows a lot about science, technology and maths, so is able to use this knowledge whenever things get tough.
Chunk is a huge Blaze fan so he’s a very happy boy to be given the chance to have a party. We’ve been sent a great party box including invitations, goodie bags, colouring activities, educational activities and Blaze toys.
The Blaze and the Monster Machines toys are part of a new Fisher-Price toy range, available from Argos and Smyths Toys Superstores. We were sent a selection of these toys including a Fisher-Price Launch Pack containing many of the die-cast vehicles including Fisher-Price Transforming Turbo Launcher.
During the party on Wednesday there will be chances to win some of these great toys on Twitter so use thehashtag #NickJrBlaze during the party hours to join in, and don’t forget to say hi to me as I will also be taking part using my twitter.
You can watch Blaze and the Monster Machine episodes every day on Nick Jr. and there will be a special hour long episode on Wednesday 16th March at 2pm so set your planner!
Visit nickjr.co.uk for more fun Blaze and the Monster Machines activities and games.
Follow me on Instagram, Twitter, Pinterest or Facebook.!function(d,s,id){var js,fjs=d.getElementsByTagName(s)[0],p=/^http:/.test(d.location)?’http’:’https’;if(!d.getElementById(id)){js=d.createElement(s);js.id=id;js.src=p+’://platform.twitter.com/widgets.js’;fjs.parentNode.insertBefore(js,fjs);}}(document, ‘script’, ‘twitter-wjs’);