I took a little quiz yesterday by Victoria Plumb to see what my ‘celebrity home style’ was, and I think the result was spot on!

My interior design style is apparently “QUIRKY but oh-so-cool, like Jess and Nick from New Girl. I fuse vintage finds with offbeat pieces and home comforts. I love to mix it up”.

I’ve never been one to follow the herd (I hated the films Titanic and Pearl Harbour, I had a friend from each of the school “groups” rather than being part of one group and I was one of the only teens in the late 90s who didn’t own a pair of Reebok Classics), and I’m also the same where it comes to my home.

My most recent room makeover has been my toilet. Now that Chunk is in nursery for 3 half days per week, I’ve finally got around to being able to do those little jobs that would be impossible with my little whirlwind around me.

So last week I took advantage of my three hours and gave my toilet a little freshen up. I call it my theatrical toilet, as it now feels like I’m entering some flamboyant theatre and the toilet is my stage! 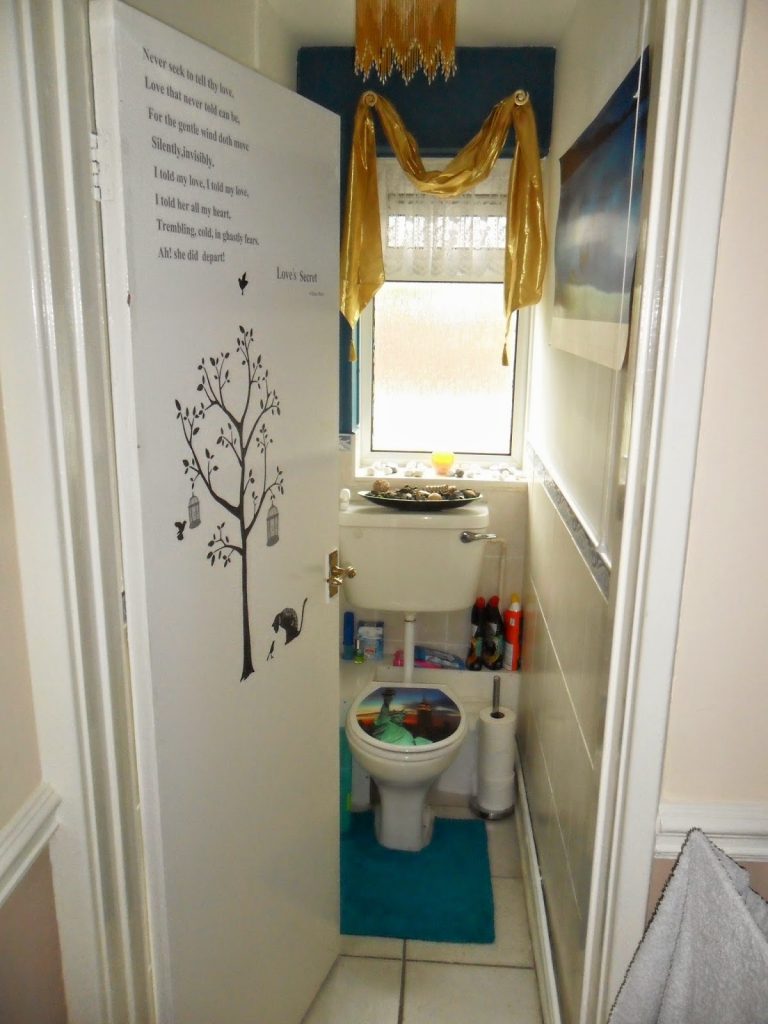 I love bold colours, and feature walls are a bit of an obsession of mine, so chose teal to bounce off crisp white walls. 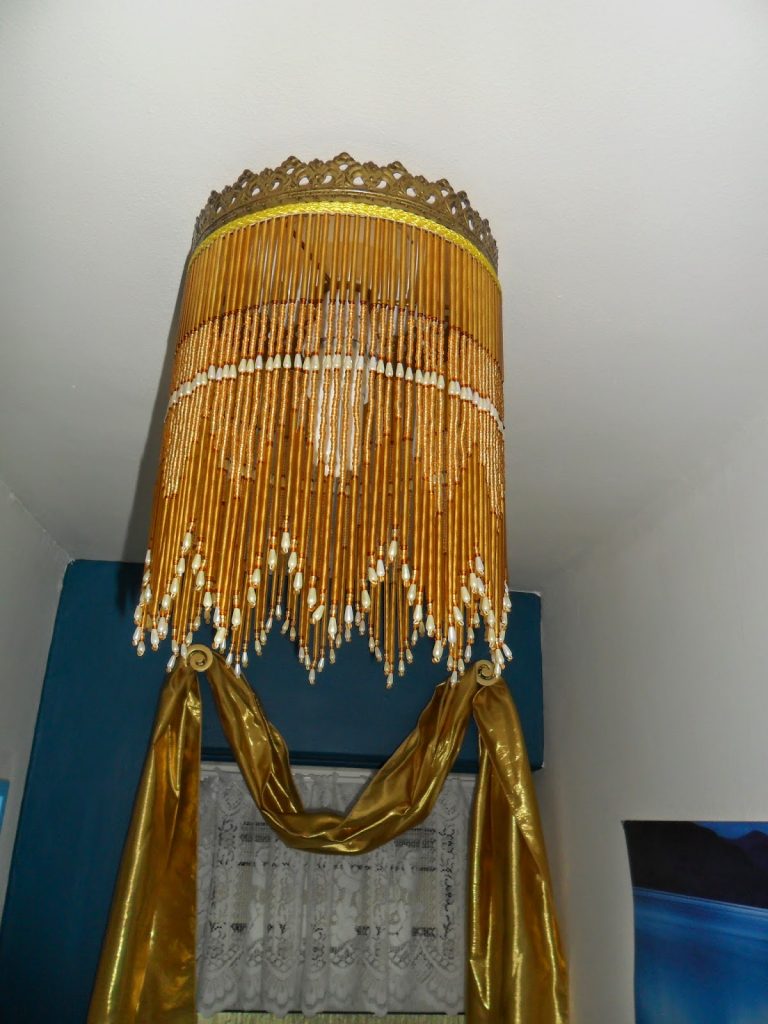 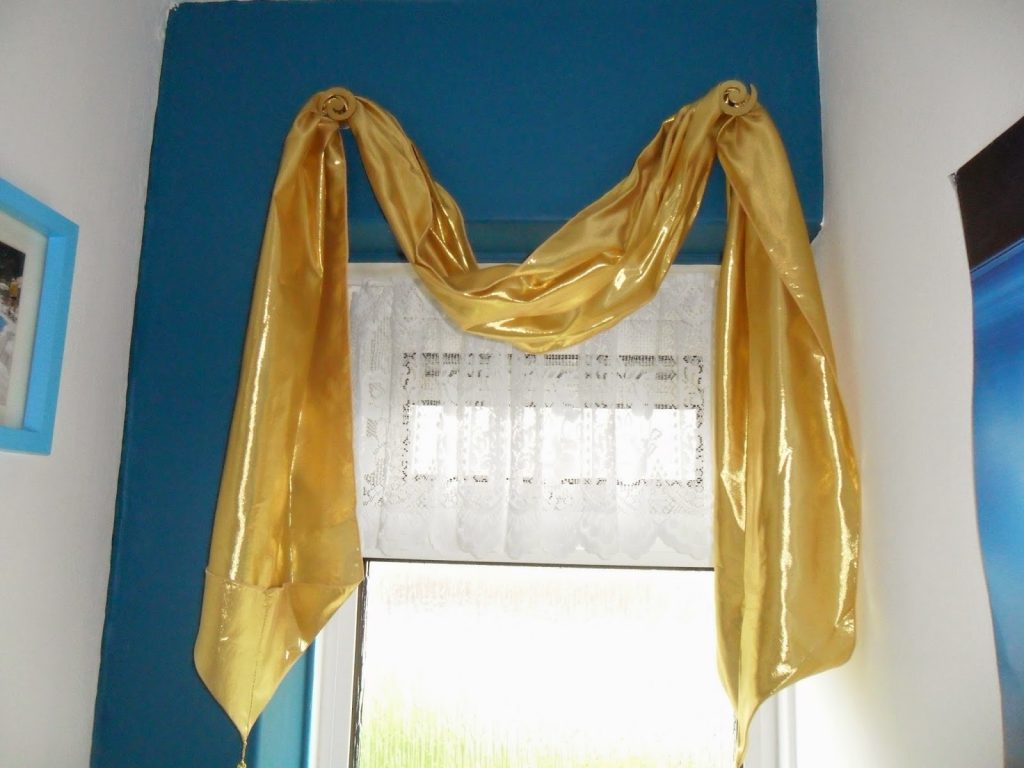 I used a teal toilet mat and toilet brush to further enhance the contrast, and added touches of gold in the form of a gorgeous lampshade and my quirky gold drape, which I love purely for the fact that it looks crazy! 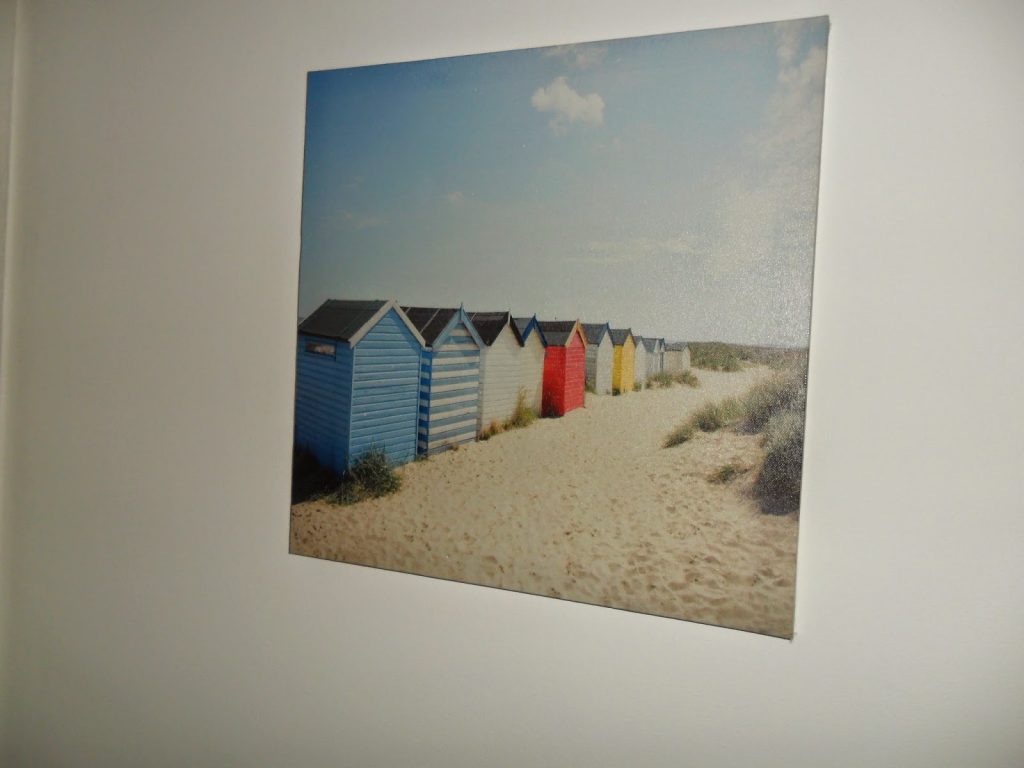 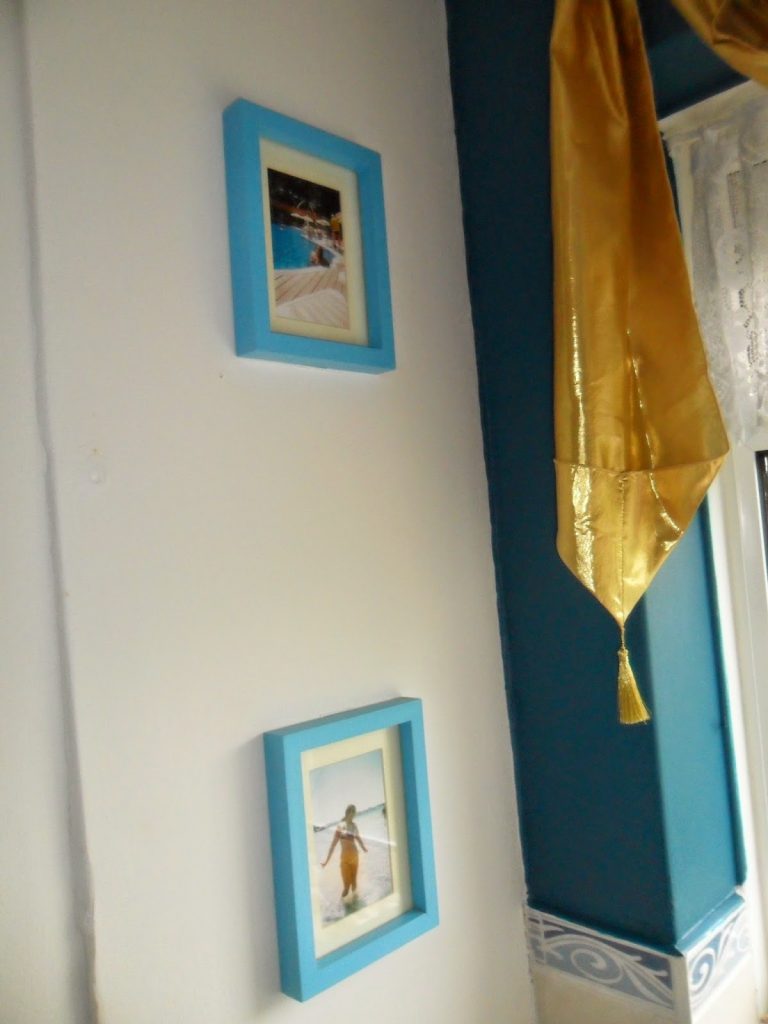 I have a blue canvas of beach huts to champion my city (Brighton), as well as some blue frames containing pictures of my sunning myself in Majorca (pre-baby).

These are to give it a peaceful vibe, as I’ve always seen a toilet as a place where you can get down to some serious thinking and contemplating as well as your daily physical duties!

I’ve also got a 3D picture of New York on my toilet seat, as New York is my most favourite place in the world, and I wish I could afford to go back there (and live there!). Some may think it’s tacky, but I think the colours actually work well with the rest of the room. 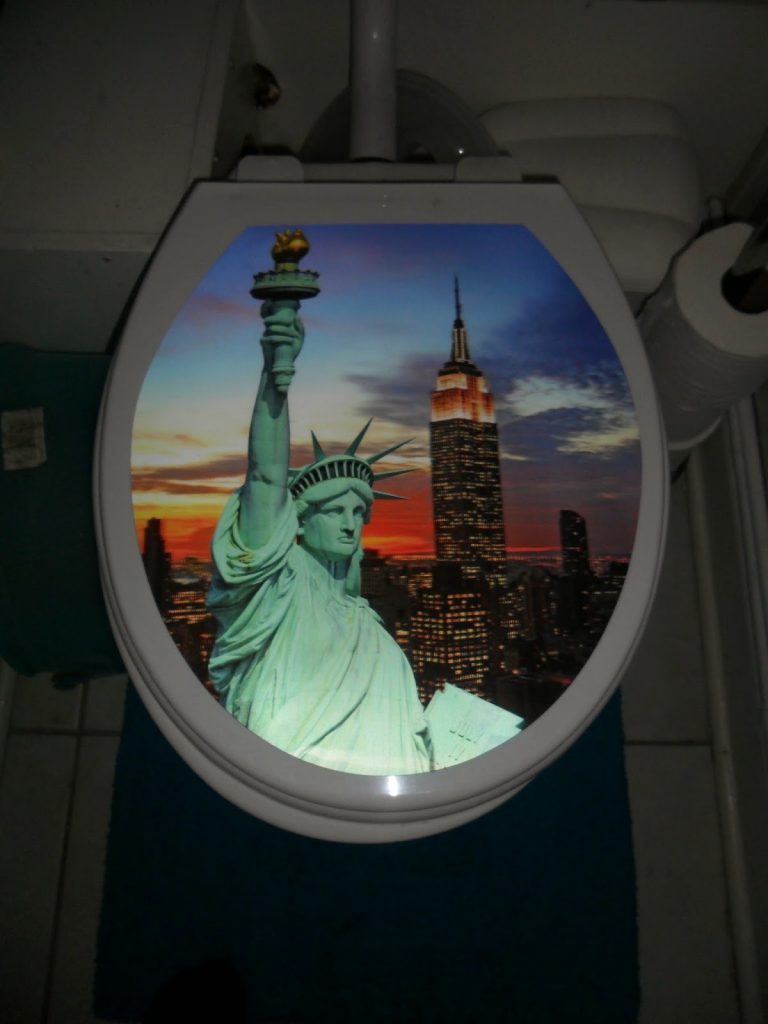 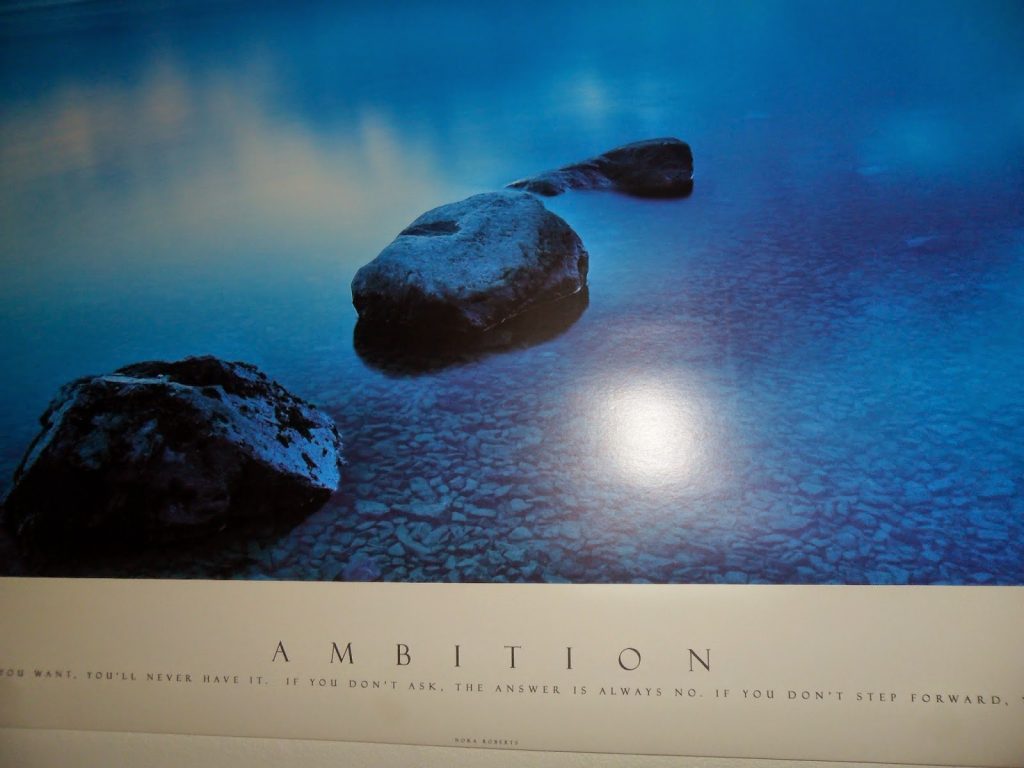 To add food for thought, I have a gorgeous picture water and stones, with a quote about ambition and why it’s so important never to lose it. 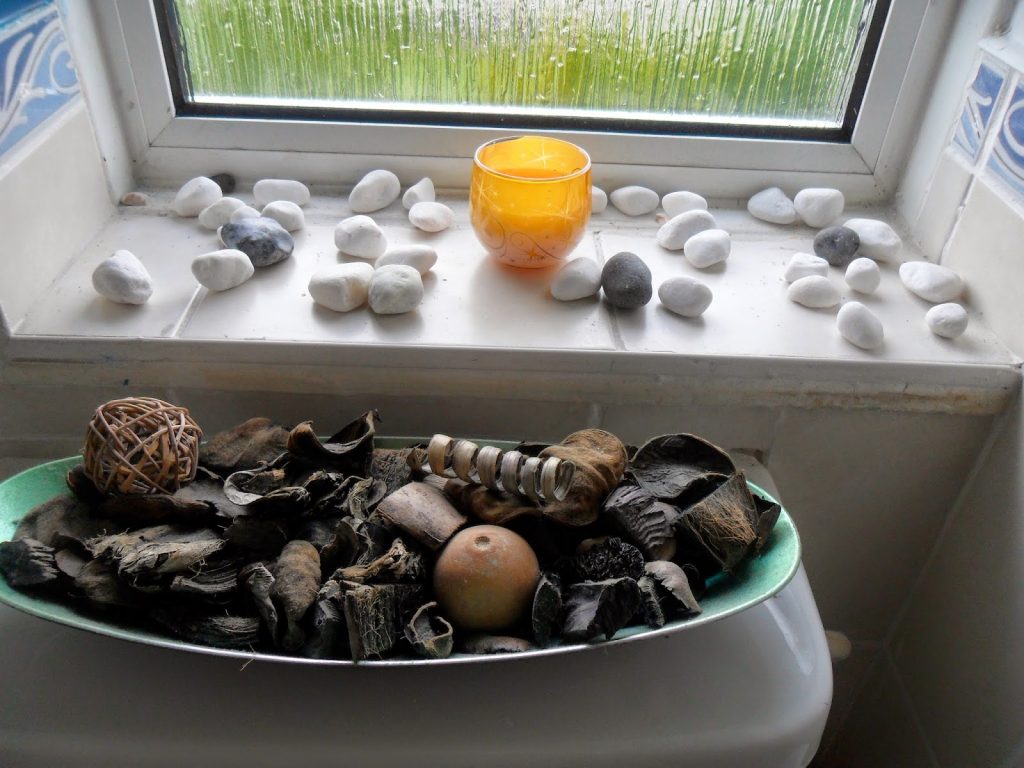 I can read this a thousand times and it never fails to motivate me, which is why I adore it. To match the stones in this picture, (and to keep with all things Brighton), I have white and grey pebbles on my window sill too, along with a gold candle.

On the door, I’ve got (another) quote, this time by William Blake, about love which is accompanied by a pretty tree, birds and a cat. 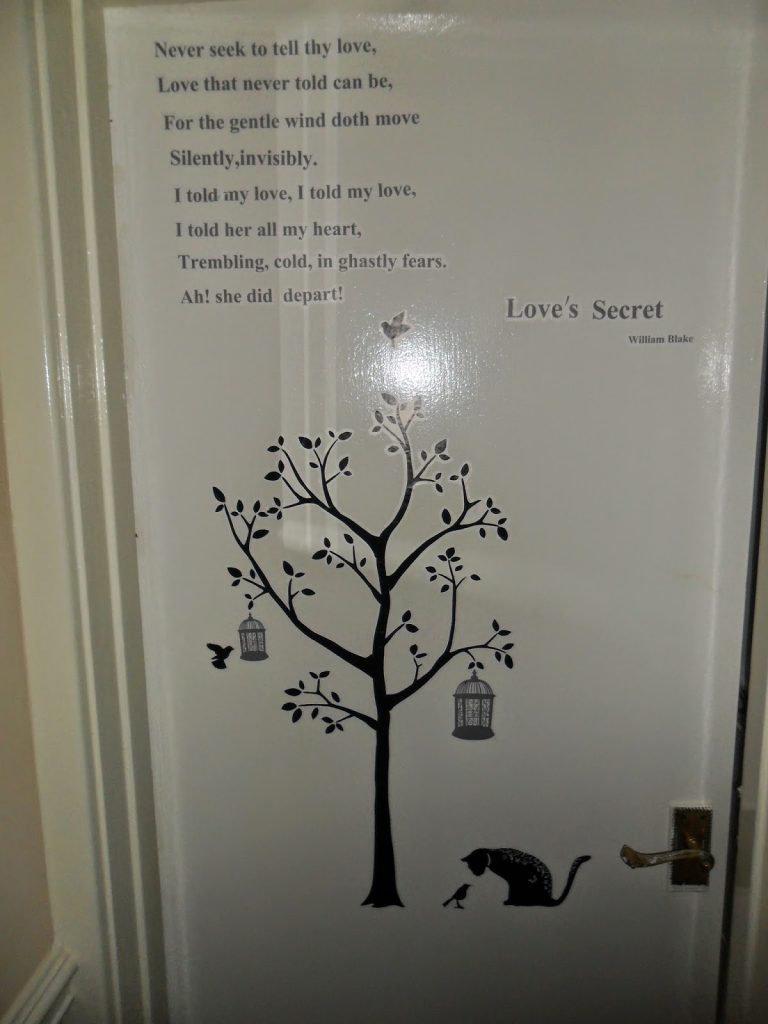 What do you think of my camp, flamboyant toilet?

The next rooms that desperately need a makeover are my kitchen and bathroom, but my priority is the bathroom because I really need a new bath! The previous owners gave me a bath which is in poor condition- rust and strange emulsion-like paint has been used on the inside of the bath! I hate it, but due to my very low funds at the moment I’ve had to put up with it.

I avoided putting Chunk in it for as long as I could- I only recently stopped putting Chunk in the baby bath, because he was getting too tall for it! So now he has to use the bath (I use my tiny trickle of a shower) I really want to sort it.

That’s partly the reason why I entered this challenge, because being a low-wage single parent means it’s really hard to do anything like buy baths and pay for fitting. If I was lucky enough to win, I would go for one of Victoria Plumbs gorgeous Boston Baths, as I could really do with a shower screen too. I would also look at their showers to see if I can get one with a bit of power to blast my tight, stressed out mummy shoulders!

This post is an entry for the #GreatBritishHome Challenge  sponsored by Victoria Plumb, a source of quality bathrooms for every type of home. Take its “What’s Your Celebrity Home Style?” quiz to discover what your home says about you.”