He has given signs for the past year that he is able and wanting to do it and has used the toilet and potty many times, but he just won’t do it regularly.

So is he ready? He turns three next month and I really wanted to do it before then, and I guess in some ways I’m very aware of how other mums can judge when they see him in his nappies, because he looks far older than his years. But the other half of me reminds myself that they all do it in their own time and do I really care what another mother thinks? No!

HUGGIES® Pull-Ups® potty training expert and child psychologist Emma Kenny has been kind enough to provide me with some advice and reassurance so I wanted to share it with you, if like me you are totally clueless about when and what should happen!
Emma says most children are around the age of two and many are nearer three (phew!) before they even begin to show signs that they’re ready to start training.


According to HUGGIES®  there are 8 Signs of Readiness, which are: 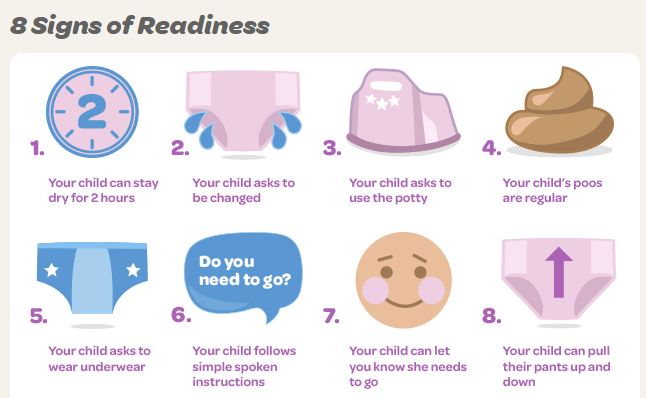 Chunk is showing most of these signs, but he still doesn’t like telling me when he has done a number two, so maybe he really is just not ready yet. My nephew didn’t want to know his potty until he turned three, so it’s more common than I realise sometimes!

But when he is finally ready I already have lots of pants with his favourite things on them (dinosaurs!) which he does sometimes wear when we are at home for the day. His main potty is in the living room and he has tested out the toilet seat I have bought for the main toilet.

I have also made a sticker chart which is stuck next to the toilet and he puts stickers on it whenever he uses the toilet. Again, some days he loves this and other days he just doesn’t care!

His cousin has taught him to wee standing up, but again he is only really interested in doing this if he has seen his cousin doing it. The joys of an only child!

If you have already begun your training, according to Emma setbacks can be quite common. Apparently this is because children can start to get bored of using the potty and begin to have accidents again.

Emma advises you stay calm, don’t be negative about it to the child and just remain consistent at all times. And don’t forget to give them plenty of praise when they do use the potty which always helps get them back on track.

Some parents swear by them and others hate them. I use a mixture of nappies and pull ups just to see if it has a difference. Chunk prefers the pull ups because on the days he feels like copying his cousin and using the toilet he can pull them down easily. He does also just love big boy pants, so trying to teach him that he cannot wee in those like his pull ups can be tricky!

Visit www.pottytraining.co.uk, where you’ll find help and resources for every stage including tips from Emma Kenny, reward charts, games and lots of other free downloads to help make your potty training journey more enjoyable.