A smartphone camera that predicts your next move you say? I’m sold!

I’ve been incredibly lucky by having the opportunity to test out the latest smartphone in the Sony Xperia range, the Xperia X for the last couple of weeks and it’s safe to say I’m in love. 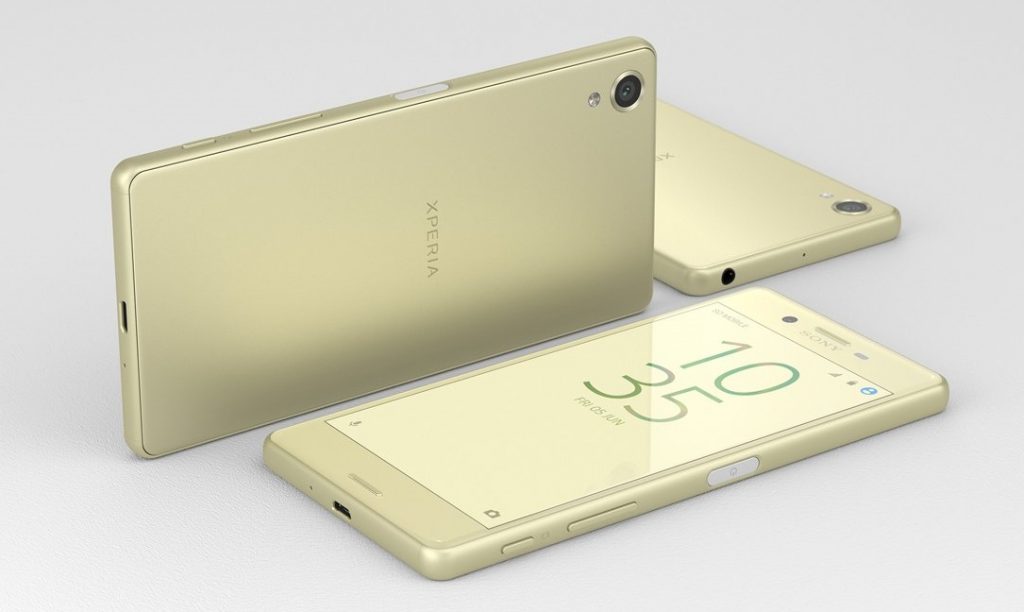 For the past year I’ve been using an Xperia Z3 so am already familiar with the basic set up of the Xperia range, and this new model has not let me down.

It comes in a compact, but colourful, box with a charger and basic instructions. I would have liked to see a hands-free kit in there, but apart from that I was impressed with the packaging and contents.

The phone comes in four colours: Graphite Black, White, Lime Gold or Rose Gold. I had a rose gold Xperia X which was a nice change from the usual black handsets I’ve been used to in the past. It has a metal back and the phone is shaped to fit your hand as best as possible, and I must admit it does just that.

It’s lightweight and has a curved glass edge around the screen which feels lovely when you’re typing or scrolling. 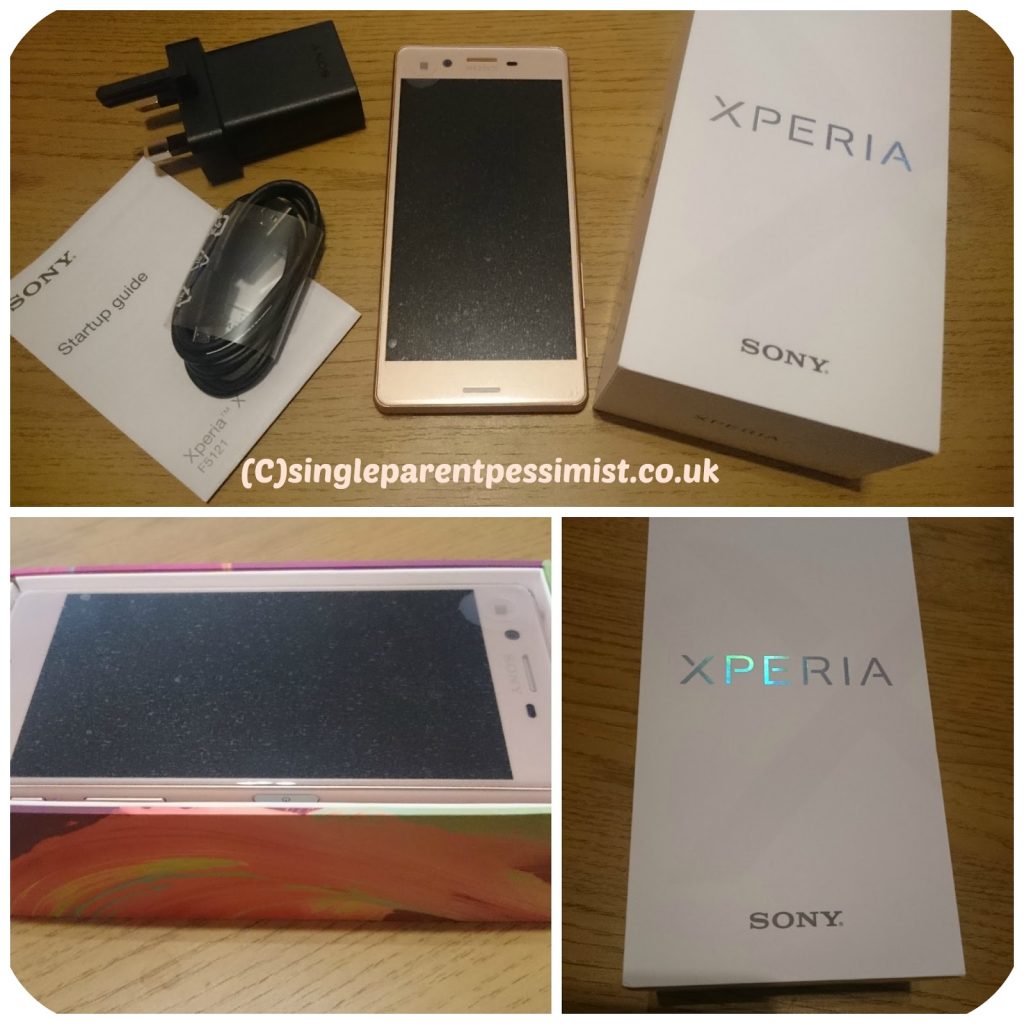 It took no time at all to charge the phone, because the Xperia X battery has the longest battery lifespan by Sony smartphones to date. The battery can apparently last up to two days without charging and the quick charger (UCH12) can give the phone 5.5 hours of power in just ten minutes. This is handy when I’ve forgotten to charge it whilst getting Chunk ready for nursery and only realise just before we’re due to leave, which seems to be most days recently.

The battery uses amazing new technology known as Qnovo Adaptive technology which basically monitors and adjusts the charging currents to improve and maintain your battery’s lifespan- clever or what?!

Once I had charged the battery in no time at all I then set it up. It was pretty simple (thankfully) and there was even a useful guide you could use on the phone to ensure you have set everything up.

I was able to plug it into my computer to transfer lots of photos that I wanted to keep that weren’t on my SD card, and I love how there is much more space on this phone than the Z3, as I now have 32gb to play with as well as any SD card I add to it.

Because I have a Google Plus account it meant I could transfer phone numbers and emails quickly too which is always handy, and I found it easy to change the basic settings, such as the phone’s wallpaper, screensaver and sound notifications.

A clever little thing that this phone does is fingerprint recognition. I always have a pin number to get into my phone to avoid my gorgeous son accessing it while I’m vacuuming or out of sight for more than thirty seconds, so this is one step better.

It basically knows my thumbprint so as soon as I press the button it unlocks it for me. This is so much quicker than typing in my code every time (and re-typing when I press the wrong numbers a few times which is nearly every time), so thank you Sony!

These are always important, so for you fellow techno geeks I’ve listed them just here: 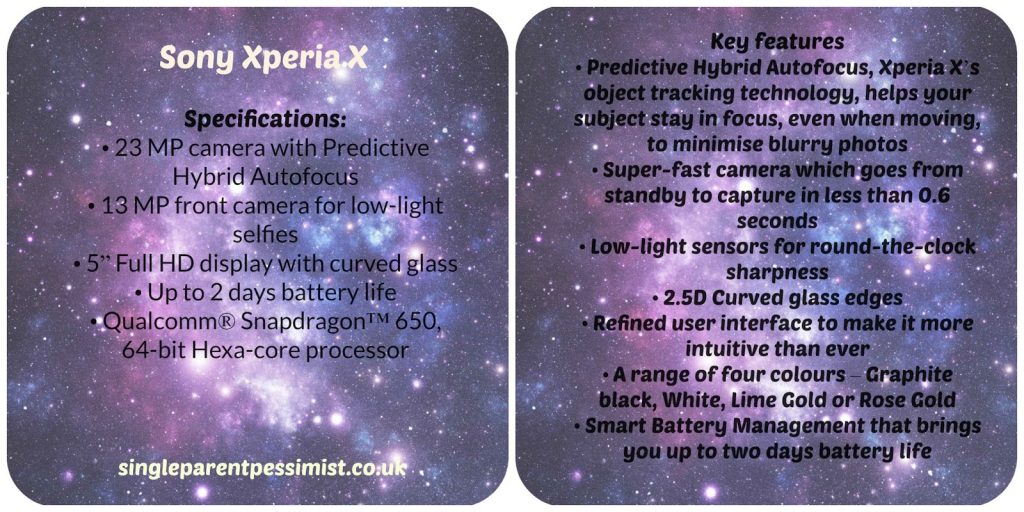 The camera for me is by far the best thing about this phone for so many reasons!

Phone cameras are vital to me because I cannot afford a blog-tastic DSLR camera at the moment but I still want high quality shots.

The handset’s main camera is a whopping 23 megapixels and has some fantastic features including Smart Capture Technology and Predictive Hybrid Autofocus.

To put it simply, these features allow you to take clearer photographs. The award winning G lens mixed with this technology enables you to pick a person or object on the screen so the camera can track them and keep them in focus whilst they’re moving.

So many times I attempt to take an action shot of Chunk whilst he’s running around or playing football and I end up with blurry shots, so I tested this out with a spot of garden football and the photos did not blur. Nope. Not once.

The camera also features Steadyshot™ which helps you to shoot steady images and videos as it rather cleverly compensates for your hand movements, making panning a lot smoother which is definitely something I’m benefiting from!

And to further add to this phone’s list of positives is the front camera, which on most phones can be shockingly poor. The front camera is 13 megapixel and includes low-light sensitivity and noise reduction technology so you can take sharper, clearer selfies during the day and night. No more dark, blurry selfie shots on rare nights out for me then!

I’ve recently taken part in Sony’s new photography challenge called #WhatsYourX with this phone as it can take shots of things that happen so fast that you may otherwise miss them. This is because the camera starts up really fast- it can go from standby to capturing a shot in 0.6 seconds! So it literally can shoot those blink-and-you’ll-miss-it moments which they have called ‘X Moments’.

To take part in their challenge too, just upload your X Moment photo on Twitter using the hashtag #WhatsYourX and add @SonyXperiaGB so they can see them. I love checking out this hashtag on Instagram too, which is a place I’ve started storing all of my Xperia X shots that I treasure most.

Here’s some of the best shots I’ve taken with the phone so far:

So What’s My Overall Thoughts Of This Phone?
Sony have done well with this new model, particularly with the camera so I am one very happy lady.
The only minor thing I don’t like is the new keyboard- I’m old fashioned (and also have fat fingers) so love the T9 classic keyboard which my Z3 had, as I never mistakenly touched the wrong keys with my large hands and could type fast. This phone doesn’t appear to have this option so typing has taken me a lot longer but I imagine I will get used to it, as the keyboard software starts to pick up the way you type to help predict what you’re trying to type.

I also miss my phone being waterproof which the Z3 was, but apart from this I don’t have a bad word to say about the phone.

The case design is sleek, smooth and feels great to hold, and the screen quality is brilliant.
The cameras are out of this world and are helping me to achieve high quality photos for this blog and Instagram so I no longer have to panic that I don’t have a fancy camera. The camera has lots of options to keep it interesting, and my favourites include the background defocus and the black and white modes.
The phone processor enables me to use the apps quickly and efficiently, and it doesn’t get too hot when used for long periods of time.

Overall I recommend this smartphone to anybody who has a love for taking photos like I do. If you want a simple to use phone this meets that criteria and an added bonus is it’s easy on the eye too!


Where to buy the phone

“I am a member of the Mumsnet Bloggers Panel, a group of parent bloggers who have volunteered to review products, services, events and brands for Mumsnet. I have not paid for the product or to attend an event. I have editorial control and retain full editorial integrity.”