A Change from Chocolate Advent Calendars…

Home Uncategorised A Change from Chocolate Advent Calendars…
6th December 20151st March 20203 Comments on A Change from Chocolate Advent Calendars…
I don’t know about you, but I get bored of the same old chocolate advent calendars each year and thought I would try something different this time around and I am pleased with the result!
Chunk is nearly four now and he is obsessed with reading (thankfully) like I was at his age, probably because I only let him near his tablet once every couple of months (yes I am that kind of evil mother).
I am traditional in that reading is brilliant for your imagination, your vocabulary and of course it helps when it comes to learning to write. I exhausted my children’s library by the time I was about 10, so moved onto the adult fiction section and English is one of the subjects I always excelled as a result in my opinion.
Chunk and I read a couple of stories every night when he gets into bed and sometimes we read during the day too, and I’m impressed with the imagination he has and he’s now at the stage where he can tell me stories of his own which are soooo lovely to hear.
Advent Books
So this year I decided to give him a book each day rather than chocolate to count down to Christmas, and we get to read a different book each bedtime. 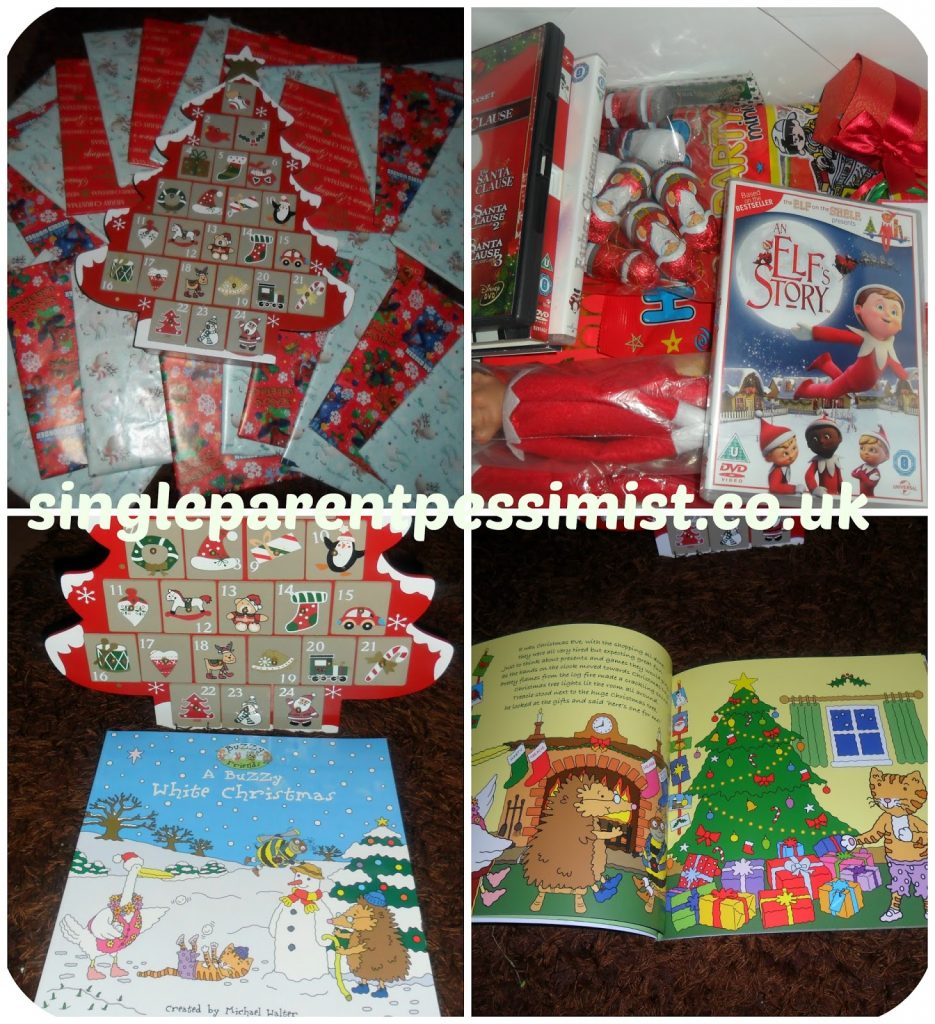 When I heard of this idea last year my first thought was about the cost, but over the year I have bought books from car boots and charity shops for as little as 10 to 50p each, and some of the books he already owned but have sat on the shelf for a year and he’s forgotten they existed!
One of the new books I got him was A Buzzy White Christmas, which is part of the Buzzy Friends series which we’ve never tried before. It’s written by Michael Walter, who created this series of books for his granddaughter as he wanted to teach her things through fun reading. In this book the Buzzy Friends are excited about Christmas and they learn about what Christmas is about as well as planning what they need to buy to decorate their tree and celebrate Christmas. Chunk loved this book and it inspired him to want to get his Christmas cards written and to think about what he can buy his nanny!

Christmas Box and Elf on the Shelf
I’ve also made a Christmas box this year, where I have added Christmas films, sweets and those famous Elf of the Shelf toys that everyone fills your Facebook news feed up with during December.
I was against them last year, but I’ve decided to give them a try as Chunk is now at the age where he understands Christmas more and we can really explore his imagination with what the Elves get up to at night!
I got him the Elf Story DVD as well so he could see what the elves do when he’s asleep and how they watch him during the day to see if he has still got the Christmas spirit of love and helping others.
I initially didn’t like the idea of using the elves telling Santa he’s been naughty as a threat, because I worried about what happens after Christmas finishes, but he’s been quite a handful recently so it’s actually been a help! Of course I don’t use it often, and I imagine after Christmas I can just remind him that if he’s naughty the nice new toys can be confiscated…
It’s been fun finding things the elves can do during the night that Chunk will find amusing in the morning, and I’ve seen some great adult alternatives on the net that I may use when he’s a teen!

Those bored elves have got chunks precious paw patrol toys out!!! Wonder how he will take it in the morning lol #elfontheshelf #Xmas
A photo posted by Claire (@singleparentpessimist) on Dec 2, 2015 at 1:57pm PST

I was sent a copy of the Buzzy Friends book to read for the purpose of this review. No payment was made and all opinions are honest and my own.