Chunk started nursery last week, and it went incredibly well. We had three induction visits, lasting two hours per time, and he probably only needed the first one!

On the first session, I stayed with him the entire time, and we explored all of the toys and the garden. He was obsessed with the water table, to the extent that he wet through his clothes (even with a waterproof apron on) twice, so I was thankful that I had thought to pack two spare sets of clothes!

It was a good chance for me to see what the other children were like, and how the workers responded to them all, as it is a very busy nursery. I only chose it because Chunk seemed to feel so comfortable there compared to all the others we viewed.

He has a keyworker that looks after him and three other children each session, and there are two back up keyworkers for when she is on holiday. This is a great idea, because it means he gets to form an attachment with an adult there, which is vital for children under the age of three. It means that he can has someone to go to when he is upset, falls over or just needs a cuddle, and the more people he can form attachments with, the better he will become at doing it which sets him up for life!

During the second induction visit, I had to keep leaving the room for little bits of time, to get him used to me leaving, and so he could see I would always come back. He was fine with it, and was so engrossed with feeding the guinea pigs and playing in the mud, that when I said goodbye, he just waved and blew me kisses, saying “Bye Mummay!” and then carried on happily. This made me feel very happy that he was settling in so well, and even the keyworker said he would be fine once he started nursery properly.

At one point at this session he did fall over, and his initial reaction was to ask for me, but when his keyworker cuddled him and then got him involved in another activity, he was fine.

On our final session, I left him for 45 mins at a time, and he was brilliant! I got to sit with the chef, whilst he cooked their lunch (I know, how posh is that!?) and it was great being able to hear him laughing and screaming in the garden.

To prepare for nursery, I bought him a little backpack, and spent time going through his wardrobe to find all the clothes I didn’t mind getting wrecked. All of the parents I had spoken to at this nursery had told me to only put him in old clothes, as the paint, pens and mud are impossible to get off the clothes. Knowing Chunk as I do, he’s a typical boy that loves getting wet, muddy and running about like a lunatic, so I didn’t need persuading to do this!

Chunk (like most toddlers) also enjoys taking his jumpers and socks off when he’s mid play, and lobs it wherever is easier, so I got some name labels for his clothes, wellies, shoes and even his backpack, as my sister had warned me that things tend to get lost or mistakenly taken by other parents at nurseries!

I found a great company that do various styles of labels, called The Name Label Company, and they kindly gave me some iron-on labels, footwear labels, and some name stickers to try out. 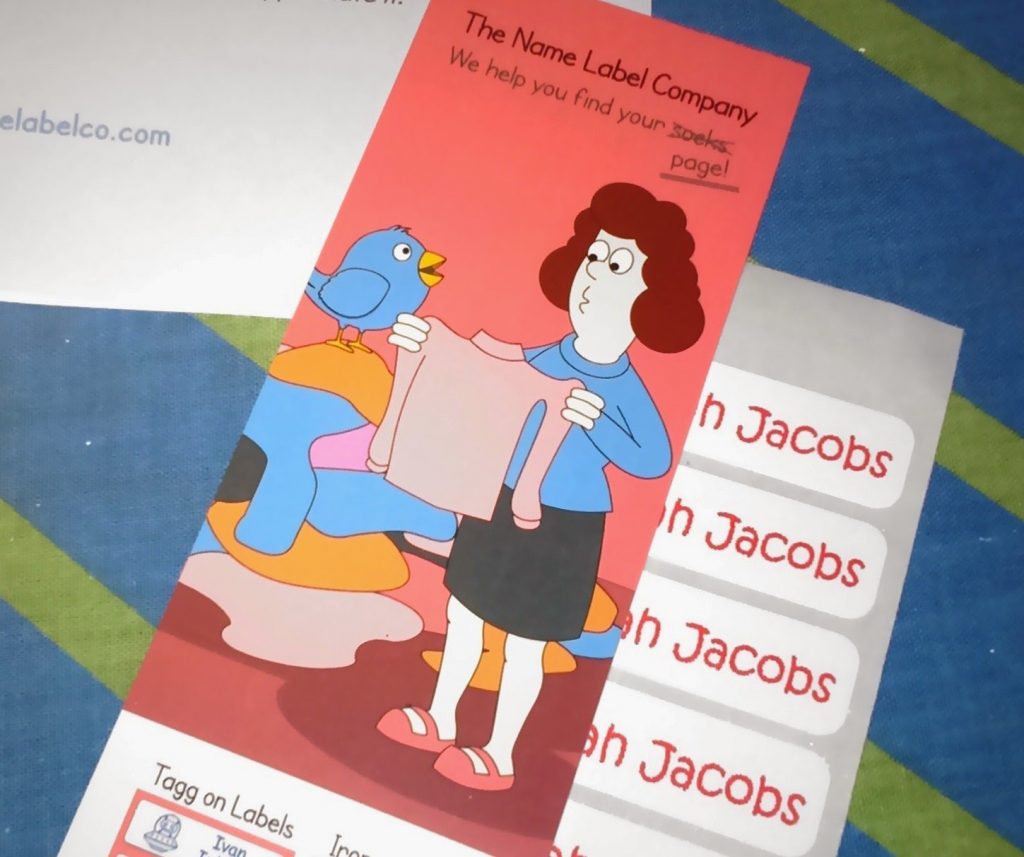 Chunk got some pirate style labels for his clothes, so the night before nursery, I spent some time ironing them all in. Bear in mind my iron has only been used 3 times in the 3 years I’ve had it, I was not looking forward to doing this!

The instructions said to put a thin piece of material over the label and then hold the iron on it for 6 seconds. When I did this, I found it wouldn’t stick (maybe the material wasn’t thin enough but I couldn’t find anything thinner!). So I used nothing and hoped for the best, and it worked. I have washed the clothes a couple of times since then and so far the labels have not come off!

The shoe labels are handy, and really cute, because they are in the shape of feet, and you can imagine where all the shoes and wellies get thrown in a nursery full of manic toddlers- it’s mayhem!

I love the design of the labels, and you can pick what pictures you want on them, which makes it easier to quickly identify your child’s things when you are routing through the lost property bins!

We then had his first proper nursery session the following day, and after a timid walk into the nursery, once I pointed him to the water table and sandpit, he was fine. When I came to pick him up, his keyworker told me he was great for the entire session, apart from just before lunch when he got tearful and wanted his mum. She reassured me that once she gave him some cuddles, he was fine, and then he ate all of his lunch and even had seconds (that’s my boy!).

I thought I would feel sad when I took him for his first day, but I was surprisingly ok- I think it’s because I did all my crying on the first few times I left him with my sister and mum when I went back to work. That was AWFUL, so in some ways I am already used to leaving him.
I do feel strange being without him, but I love knowing he is doing all the messy activities that I just cannot stand doing in my home!

I am not looking forward to all the bugs, nits, viruses and bad behaviour that he will no doubt pick up from his fellow peers there, but I am prepared after seeing how my nephew presented in the first few months of nursery. On the bright side, I love that he is going to make some more friends, his speech will get better (even though the staff commented on how great his vocabulary is for his age) and he will get to burn off lots of energy!

For the purpose of this review, I was given the labels for free. I received no payment for this post, and all views are honest and my own.