Single Parent Dating in the City: My Rant and Contentment

I’m at quite a good stage of my life at the moment where I have finally gotten to the stage where I genuinely am not bothered if I ever get into another relationship again. You may roll your eyes and think ‘yeah right’ but it’s actually true.
I feel content.
That’s something I don’t think I’ve ever felt and it’s pretty fricking nice. Sure I have no money or time to myself as I work when he sleeps and am on a sixth of the wage I was on before I had Chunk, but we scrape by and I would rather have time with him during these precious years than money to buy him toys and designer clothes.
Sure looking after a young child by myself every single day and night can be really tough at times, but I chose to have him and he has made my life so much more meaningful, busy and enjoyable!
He has tested me to the limits and helped me see what parts of my personality and behaviour are good, and which parts have needed to change. He is my motivation to enjoy life rather than just exist and the things that used to worry and bother me are so insignificant now.
I have dated a few guys over the last two years, and to be honest none really floated my boat. I had good chemistry with a couple but as I got to know them it began to wear off.
Lots of men have asked me out on dates (no I’m not a bighead I’m just being honest lol) but I find myself happy to talk over the phone but the thought of finding a sitter doesn’t fill me with excitement. I would rather save my rare babysitting timeslots for things I love to do like DIY, work or hanging out with my girlies. I’ve had a few dates with guys and at the end of the night felt like I had wasted a perfectly good babysitter that could have been used for something else and I could have caught up on my Hollyoaks and Neighbours!
Through these dates and talking to numerous guys online, I’ve noticed that there is a perception that single mums are desperate because they feel so lonely and don’t get out much, so they will take whatever they can get. This INFURIATES me no end!
Sure when I first became a single parent when he was 6 weeks old I felt extremely lonely and isolated and found comfort in using social media to talk to people and to even date. I would find myself sometimes going on dates with guys I already knew I would probably not like, but I wanted to try just in case.
But I find as a single parent I have become far pickier than ever. The picture below highlights my feelings exactly and inspired this post. 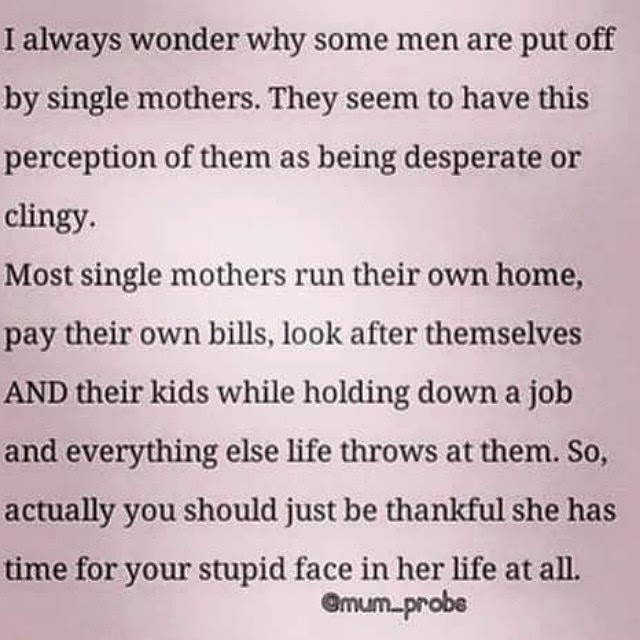 I have been on dates with younger guys, older guys, working guys, non working guys and I have stopped talking to them as soon as I have noticed certain things. This includes having no ambition (how can you not want to do something with your life?!), living with their parents (enough said), not working or being hugely in debt.
I don’t think any of these points are shallow, I just know what I want. I want a guy who can pay his own way as the majority of my exes have been taxied around by me and pretty much stayed at mine because they have not had the maturity to finance themselves. I have a child I do not need another!
I want someone who pays his bills, can clean his own home and who understands the importance of putting children first and that Chunk and I come as a package.
They would have to fit in with my rather hectic life, which is something not many men want to do. They want me to fit in with them (oh purleeeeease!).
And that’s why I know I’m not bothered, because not many men exist (or at least exist down here in Sussex) that would meet these criteria. I don’t want the stress of trying to fit them into my life or to try to give them the attention they would want, as Chunk is my main priority, and putting a roof over his head.
It would take a pretty amazing guy to change my feelings right now, and by amazing I mean Robert Downey Jr, Kiefer Sutherland, J for 5ive gorgeous good looks mixed with all of the above criteria and a chemistry that blows me away (not to mention being at least 6 ft tall!).
Anyone else get where I’m coming from?