The UK has the fastest growing mixed parentage population in the world, and finally the haircare industry have cottoned on to the fact that bog-standard shampoos and conditioners don’t work for us!
Mixed Chicks is an invention by two American ‘Mixed Chicks’, Kim and Wendi, and it’s become so popular over there, that the likes of Halle Berry, Ciara and Jordin Sparks are fans, and it’s now been recognised in the UK.
Alesha Dixon, The Saturdays, Alexandra Burke and The Sugababes are just some of the Brits who are raving about this, so I thought I would give it a try. 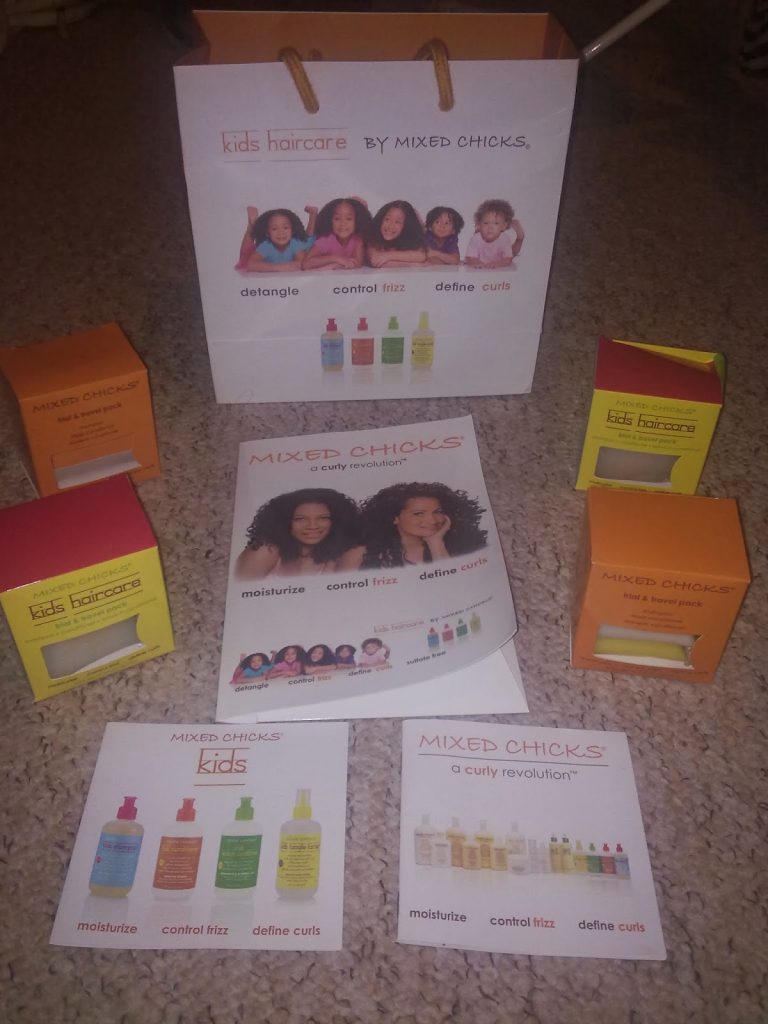 I got sent this lovely tester pack, which contained two travel shampoo/conditioner/leave-in conditioners for adults, and the same from their kids range.
Chunk loved the boxes it came in, (which was a useful distraction whilst washing and conditioning his hair I might add) and I fell in love with what it did to my hair!
As soon as I took the towel off my head to dry my hair naturally like I usually do, I instantly felt soft hair (which NEVER happens, it’s always like dry straw).

As it dried, it didnt blow up into a wannabe-afro frizz bomb, it instead stayed calm and had defined curls… yep that’s right, DEFINED curls. I only ever get those with hours of using my ceramic curling tongs, which funnily enough I’ve not had the energy to do since having a hyper toddler!

Chunk’s hair also felt so soft, and there’s no alcohol, parabens or sulphate in the products, so it didn’t affect his eczema either.
So I finally like a hair product, which I’ve never been able to say before, and I now need to save my pennies to buy a big bulk order for my cupboards!

For the purpose of this post, I was given this item to review. No payment was received for this post, and all opinions are honest and my own.!function(d,s,id){var js,fjs=d.getElementsByTagName(s)[0],p=/^http:/.test(d.location)?’http’:’https’;if(!d.getElementById(id)){js=d.createElement(s);js.id=id;js.src=p+’://platform.twitter.com/widgets.js’;fjs.parentNode.insertBefore(js,fjs);}}(document, ‘script’, ‘twitter-wjs’);