I only worked a half-day today, and had spent a lovely
morning with Chunk; – We went to a playgroup, saw Nanny and then I went to
work, but whilst I was away somebody swapped my child for the spawn of Satan!

For the last few days he has woken up at 5.50am rather than
the 6.30am that has been the recent routine (I miss his 7am wake up so much!).
So this has meant his 2 hour afternoon nap has happened earlier, as he has been
tired a lot quicker. Today he decided a quick 10 minutes in the car before I
dropped him off before work was sufficient. He refused all attempts by my
sister to have his nap, so when I arrived in the early evening, he was sleep
deprived and a bit ratty (as to be expected).
On the way home he fell asleep and I let him have half an
hour, but was conscious of the fact dinner time was fast approaching and if I didn’t
get him up, he would be awake way beyond his usual bedtime (and Mummy would
have a breakdown). So I woke him up, and he wasn’t happy; He whined and cried,
which he does do sometimes and it only takes a few minutes for him to return to
normal.
BUT THIS TIME HE DIDN’T RETURN TO NORMAL, and here is where the
tantrum from hell began- it looked a little something like this:


I did the usually hugging, soft voice and trying to show him
the food I was cooking to distract him: the crying continued. 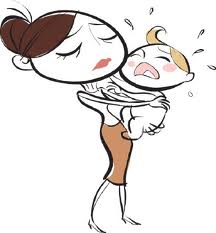 I sang and tried to show him his cuddly toys to interact
with (a great distraction usually): crying continued and started to get louder.
Tried to give him his drink to rehydrate after his nap:
beaker got slapped and thrown back at me.
Tried to give him some food that he never rejects (hence the
nickname Chunk): this too got thrown at me and the floor, followed by an icy
glare and a grunt, then more crying.
I put him down to ignore the behaviour in the hopes it would
stop: the cries turned into screams and he flung himself back to keep hitting
his head on the floor. 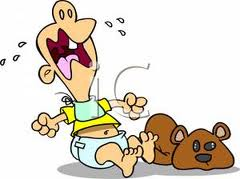 Picked him up again- cuddled- more distraction techniques
tried: the screaming continued and he started flinging himself back, smacking
my face and stiffening up so I couldn’t hold him anymore.
Tried to get on with dinner to see if the lack of attention
sorted him out: he carried on crying and then started to smack my legs, hard.
Took him into other rooms to try and distract him and then
put him down and left room to do some deep breathing, as at this point my head
was going to explode: he followed me (again screaming angrily and looking at me
like he wanted to kill me) and proceeded to throw toys at my head…HARD TOYS
AT MY HEAD.
Took the toys away, and took him back to living room and
tried to sit on sofa with him: I got hit again whilst he carried on screaming
and whining.
Put his favourite TV show on (Baby Jake) and held him:
crying lowered and he started to watch it.
(This heat wave is causing my flat to be STIFLING, so
holding a hot, angry toddler was uncomfortable to say the least!)
He then started to calm so I tried to put him down to go get
the dinner:  the crying, screaming and
flinging himself around began again.
I brought his highchair in and put him in it, pointing out
Baby Jake the whole time (and trying to keep myself calm!) and showed him his
dinner: this time he sat there and seemed to calm.
I got his carrots and started doing my usual “dip dip” song
and dipping it into the sauce, and THANK GOD he started to look more like my
son and began to eat quietly!
During the meal he did smile and interact, but did
occasionally throw food at me when he didn’t like it on his gums (so tantrum
still there slightly!) but I think he may be teething so I can cope with that.
Once dinner was over, he was back to my usual hyper,
daredevil, but funny and sweet boy, so WHAT THE HELL WAS THAT?!
I know they talk about the terrible twos, and to be honest
he has been having tantrums for the last few months, but he’s only 16 months
old and this was something so different (and MUCH longer) to the normal tantrums and has
confirmed that the boy doesn’t like being woken up! (His father was the same).
Maybe I should act that way every morning when he wakes me
up at 5.50am and see how he likes it…
If this is the start of things to come, I may have to invest
in some headphones, a sound-proof room and a crash helmet.
HELP! 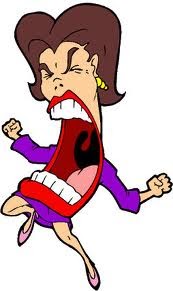